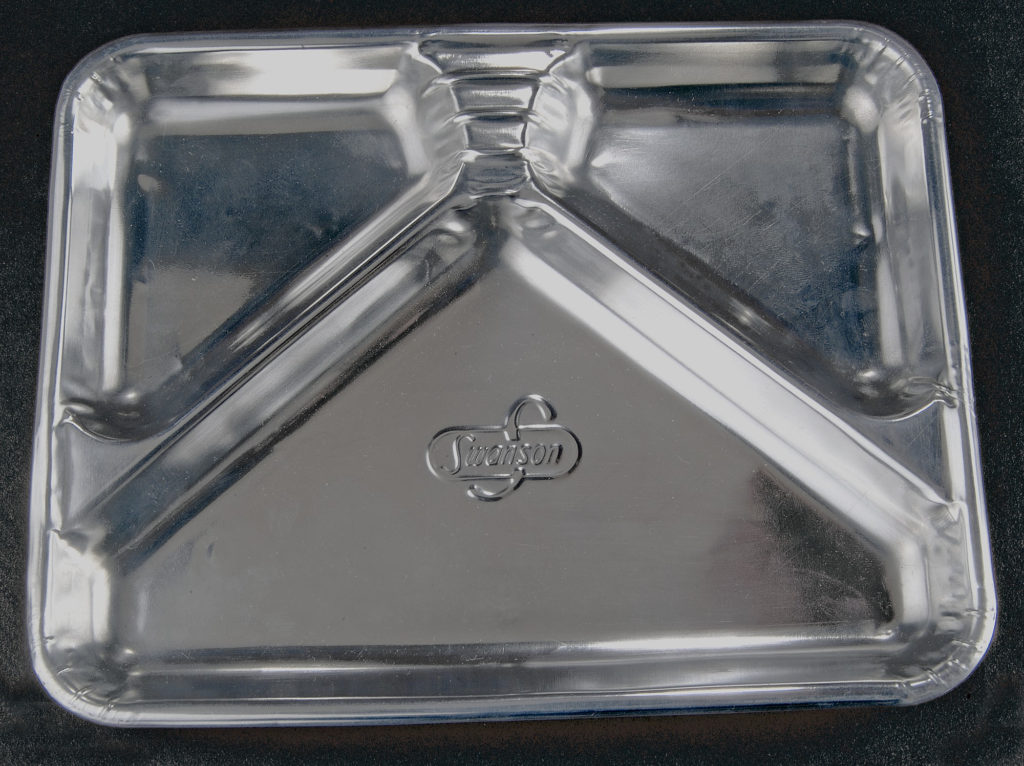 This aluminum TV dinner tray was introduced in 1954 by Swanson & Sons, of Omaha, Neb. Photo from the National Museum of American History, Kenneth E. Behring Center

Aluminum is the third most abundant element on the surface of the Earth after oxygen and silicon. It is estimated that the Earth’s crust to a depth of 10 miles contains 8.05% aluminum.

5000 B.C. – People in Iraq made fine pottery from a clay which consisted largely of a compound containing aluminum.

2000 B.C. – Egyptians and Babylonians were known to use aluminum compounds in various chemicals and medicines.

100 B.C. – A Roman commander named Archelaus discovered that wood was nearly flame-resistant if it was treated with a solution of alum. He used the solution to protect his fortifications.The Latin name for alum is “alumen,” meaning bitter salt.

100 A.D. – The Roman author Pliny the Elder referred to a substance as alumen in his book “Historia Naturalis,” which was regarded as a scientific source book through the Middle Ages. The compound alum, potassium aluminum sulfate, was used by humans since ancient times for tanning, dyeing, to stop bleeding and as an ingredient in baking powder. Alum was also used for paper-sizing in the paper-pulp industry, and in medicine for dermatology, cosmetology, stomatology and ophthalmology.

600 A.D. – A large ceramic complex was established at Jingde Zhen in China near an abundant source of white clay at Kaolin Mountain. Aluminum as an oxide was a key component in the material used to make the fine pottery.

1550 – Sometime in the middle of the 16th century, the itinerant chemist Paracelsus reportedly separated an “aluminus soil” from alum which contained the oxide of a new metal.

1750 – Andreas Marggraff of Germany discovered a technique to produce a new type of alum without sulfur. Most chemists during Marggraff’s time believed alumina was an “earth” of a previous unknown metal.

1799 – Cryolite was first described based on observations at Ivigtut and the Arsuk Fjord in southwest Greenland. The name came from the Greek “cryo” for “chill” and “lithos” for “stone.”

1808 –Sir Humphry Davy of Great Britain established the existence of aluminum by decomposing alumina in an electric arc. He named the element aluminum.

1821 – Pierre Berthier of France discovered a hard, reddish clay-like material which contained 52% aluminum oxide near the village of Les Baux in southern France. He named the material bauxite.

1824 – Jons Jacob Berzelius of Sweden was credited as the first person to create synthetic cryolite.

1825 – Hans Christian Oersted of Denmark produced minute quantities of aluminum as a metal by using a dilute potassium amalgam to react with anhydrous aluminum chloride. When the mercury was distilled away, a residue was left of slightly impure aluminum.

1827 – Freidrich Wohler of Germany described a process for producing aluminum as a powder by reacting potassium with anhydrous aluminum chloride. In 1845, Wohler established the specific gravity of aluminum and thus described one of its unique properties as a metal – its light weight.

1854 – Henri Sainte-Claire Deville of France improved on Wohler’s method of producing aluminum. The resulting metal was more expensive than gold or platinum. In 1855, a bar of aluminum was exhibited at the Paris Exposition and Emperor Napoleon III used aluminum for expensive dining utensils.

1855 – Louis Le Chatelier, the Chief Inspector of Mines in France, invented a more economical method for the industrial production of alumina by chemical processes.

1855 – Deville joined Charles and Alexandre Tissier and began industrial production of aluminum in Rouen, France. From 1855 to 1890, a total of 200 tons of aluminum metal was produced using Deville’s improved process. Aluminum production by their chemical process ran into trouble in Glaciere, a suburb of Paris, when neighbors objected to the smell of chlorine and salt fumes from the plant.

1859 – Scientific American reported that advances in the production of aluminum using cryolite from Greenland had brought the price of aluminum down from $18 per ounce in 1856 to about $1 per ounce.

1883 –Charles S. Bradley of the U.S. filed a patent application which broadly claimed the idea of fusing ores by use of an electric arc that would reduce the ores and keep them in a fused state by internal electrical resistance heating. Internal heating by electrical current was a key component of aluminum production after 1886.

1883 – Bauxite was discovered in Georgia and later in Alabama and Arkansas. The Pittsburgh Reduction Company acquired bauxite reserves and mines after 1888, and by 1909 the company owned 90% of the economical bauxite reserves in the U.S.

1884 – The Washington Monument was capped in 1884 with a pyramid of aluminum metal. At 100 ounces, it was one of the largest pieces of aluminum ever assembled. The pyramid was displayed in a window at Tiffany’s in New York City, and the New York Times prophesied that “the uses of the metal are almost illimitable.”

1884 – William Frishmuth, who supplied aluminum for capping the Washington Monument, warned in the New York Times that “foreign capitalists” were about to control the global aluminum market.

1885 – Hamilton Y. Castner of the U.S. improved on Deville’s method of producing aluminum. The annual output from his method was 15 tons.

1886 –Charles Martin Hall of the U.S. and Paul Louis-Toussaint Heroult of France, working separately and unaware of each others’ experiments, discovered a new method for producing aluminum as a metal. The method involved dissolving aluminum oxide in a molten bath of cryolite and passing a powerful electric current through the solution. The aluminum metal settled at the bottom of the reduction pot, the positively-charged cathode. The Hall-Heroult process remains in use today.

1887 – The price for aluminum dropped to about $8 per pound, but less than 140,000 pounds had been produced since 1854. Most uses for aluminum included jewelry, navigation instruments and clocks.

1887 –After seeing the success of the new aluminum producing facility at Neuhausen, Switzerland, the first French company to use the Heroult patent began operating at Froges, near Grenoble, where a hydroelectric plant existed. The company later grew through mergers to become Pechiney.

1888 – A group of young entrepreneurs met with Charles Martin Hall in Capt. Alfred Hunt’s living room in Pittsburgh on July 31, 1888, and agreed to invest in a new company called the Pittsburgh Reduction Company. A pilot plant was built on Smallman Street, with Hall in charge and Arthur Vining Davis as his assistant. The first aluminum ingot was poured on Thanksgiving Day 1888. The small plant could produce about 5,000 pounds per month by 1890. The company eventually became Alcoa.

1889 – Karl Josef Bayer of Austria invented an economical process for large-scale production of alumina from bauxite while working for a textile company in St. Petersburg, Russia. His method replaced the Le Chatelier process and remains in use today.

1891 – The Pittsburgh Reduction Company sued the Cowles Electric Smelting and Aluminum Company of Cleveland after Cowles began to advertise pure aluminum for sale. Two years later, Judge William Howard Taft ruled in favor of Charles Martin Hall and the originality of his invention.

1893 – Industrial companies in Freiberg, Germany, paid out more than $460,000 (in 2017 dollars) for current injuries caused by air pollution and another $400,000 for permanent relief. By 1907, a disease of cattle endemic for 20 years was identified as being caused by fluoride emissions from smelters.

1894 – The Pittsburgh Reduction Company imposed restrictive covenants on the new hydroelectric utility company at Niagara Falls, New York, to prevent the utility from selling power to any other aluminum smelting company. The company built a smelter there in 1895 to utilize the abundant cheap power.

1895 – The Pittsburgh Reduction Company pioneered the production of sheet aluminum in 1895. In order to increase its sales of virgin ingot aluminum, the company tried to convince other U.S. companies to manufacture aluminum sheet, but its attempt failed.

1899 – The Pittsburgh Reduction Company attempted without success to encourage U.S. industries to manufacture aluminum cooking utensils. The company organized the Aluminum Cooking Utensil Co. in 1901 as a result.

1899 – The Pittsburgh Reduction Company signed a power sales agreement with the Shawinigan Water and Power Co. in Quebec for a new aluminum smelter. The smelter was constructed in about seven months and poured its first ingot of aluminum on Oct. 22, 1901. Twenty-five years later, a new smelter was operating at Arvida using power from the Saguenay River in Quebec. This marked the beginnings of the Northern Aluminium Co. Ltd., which later separated from Alcoa and became Alcan.

1903 – The Anaconda Copper Mining Co. temporarily shut down its new Washoe smelter in Anaconda, Mont., as the company faced a flurry of lawsuits from Deer Lodge Valley farmers and ranchers claiming fumes from the smelter were hurting their crops and livestock. This followed decades of dangerous air pollution by outdoor smelters in Butte.

1907 – The Pittsburgh Reduction Company changed its name to the Aluminum Company of America, which was later shortened to Alcoa.

1911 – The alloy duralumin was first produced in 1911 by the German chemist Alfred Wilm in the town of Dueren, Germany, for which the alloy was named. Composed of aluminum, cuprum, magnesium and manganese, the alloy became increasingly solid several days after the metals were melted together and became key to the development of all-metal aircraft.

1912 – The U.S. Department of Justice filed a complaint against Alcoa for violating the Sherman Act on May 16, 1912. A decree later was issued that contained sweeping injunction provisions with clauses that were considered quite broad and limited some Alcoa business deals.