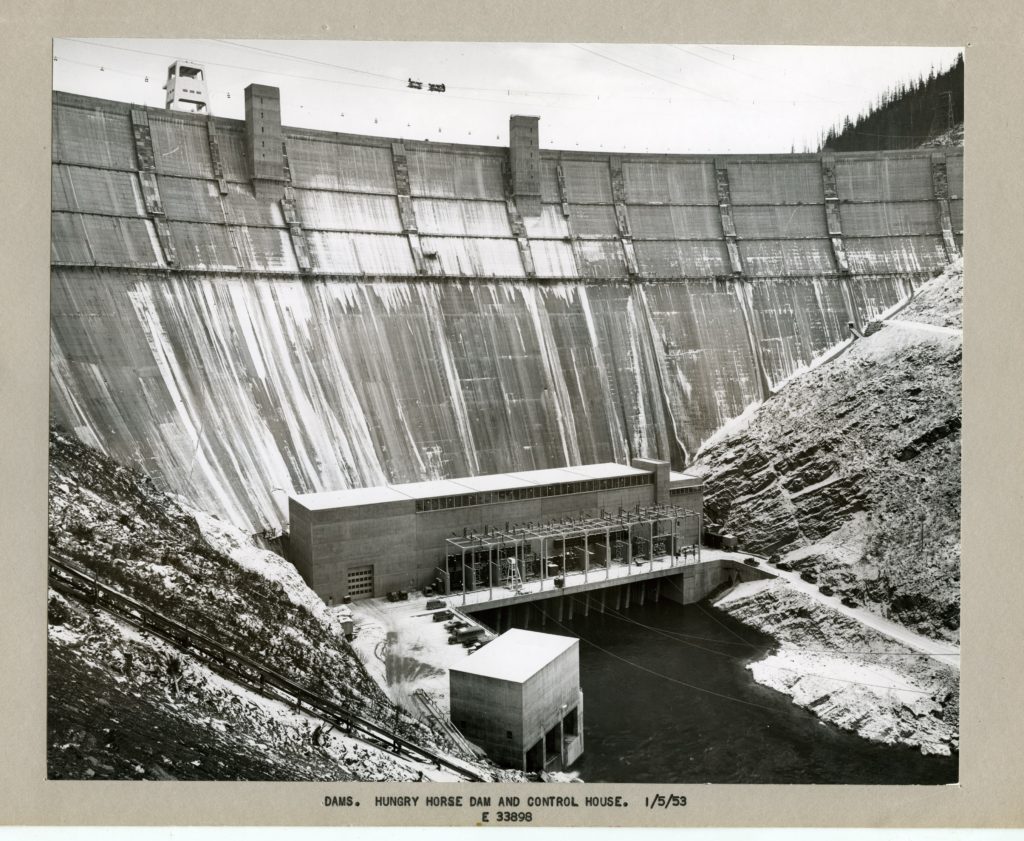 The 564-foot high Hungry Horse Dam is located on the South Fork of the Flathead River not far from the site of the aluminum smelter in Columbia Falls, Mont. Construction lasted from April 1948 to July 1953. Photo provided by Bonneville Power Administration

The 1950s saw the consolidation of the Big 3 aluminum companies in the U.S. and the introduction of new producers in the Pacific Northwest, Ohio River Valley and Gulf Coast. The Korean War defense effort assisted this development with government loans and stockpile purchases. Meanwhile, new and growing aluminum uses promoted market growth until supply outstripped demand in the recession that closed the decade. For photos and images related to this topic, visit the photo albums on the Facebook site "From Superstar To Superfund."

The Anaconda Company won the War of the Copper Kings and dominated Montana’s politics and economy for the first half of the 20th century. With diverse holdings around the world, the company had first considered building an aluminum plant in the Flathead Valley in 1914, but competing against the Alcoa monopoly was a daunting task even for a company as large as Anaconda. With the Harvey Machine Company bowing out, Anaconda seized the opportunity to break into the aluminum industry.

Chapter 18 – A boost for the Flathead

With the Anaconda Company’s 1951 announcement that it would build an aluminum plant in the Flathead Valley, the company turned to picking a site, hiring key management, locating a source of alumina, and choosing the smelting technology for the new plant. The company turned to Pechiney and its French smelting designs. Groundbreaking took place on June 2, 1953.

The Columbia Falls Chamber of Commerce erected a sign in October 1953 that read, “Industrial Hub of the Flathead” as construction was underway for the Anaconda Company’s new aluminum plant. Workers began building the first of 240 reduction pots in September 1954, and the last piece of structural steel was erected in November 1954. Raw materials began to arrive in March 1955. The plant was dedicated on Aug. 15, 1955, featuring a talk by Anaconda’s father figure, Con Kelley.

Many of the first employees at the aluminum plant had helped build the Hungry Horse Dam, which established a craft-labor legacy at the plant. Strikes that took place during construction involved workers who moved on to other projects. When it came time to organize the plant’s hourly workers, the choice was Mine-Mill, representing workers at the Anaconda Company’s mines and processing plants; the Steelworkers, representing aluminum workers across the U.S.; or a trades council, an umbrella organization that would represent a dozen craft unions and one large industrial labor union.

Chapter 21 – Investing in the company and the town

The craft-labor legacy at the Anaconda Aluminum Co. smelter manifested itself through training programs, the rise of workers to management positions, and suggestion award programs for improvements to equipment and processes. The smelter gained a reputation for low absenteeism, hard-working skilled employees, good safety records, civic volunteerism and charitable donating.

Heavy industrial plants were inherently dangerous, but aluminum smelters posed unique hazards to the potline workers. Anaconda Aluminum Co. management came up with various programs to keep the workers focused on safety. A collection of safety alert bulletins from 1995 through 2000 provided a snapshot glimpse of what plant workers faced on a daily basis.

The Anaconda Aluminum Co. was investigated for respirator violations in the late 1970s, and numerous asbestos lawsuits were filed after 2000. Company policies were established for personal protective equipment, and a focus on ergonomic designs began in 1997. Major injuries and deaths were caused by falls, burns, falling loads, explosions and vehicle accidents.

Chapter 24 – The consumer and war economies

New uses for aluminum in the 1950s ran the gamut from orbiting satellites to beer cans. Eight aluminum smelters were operating in the Pacific Northwest by 1960, while other plants sprang up in the Ohio River Valley and Gulf Coast. Similar growth was seen in Canada and around the globe. The Anaconda Aluminum Co.’s two-potline plant in Columbia Falls paled in comparison to the size of many of these new plants.