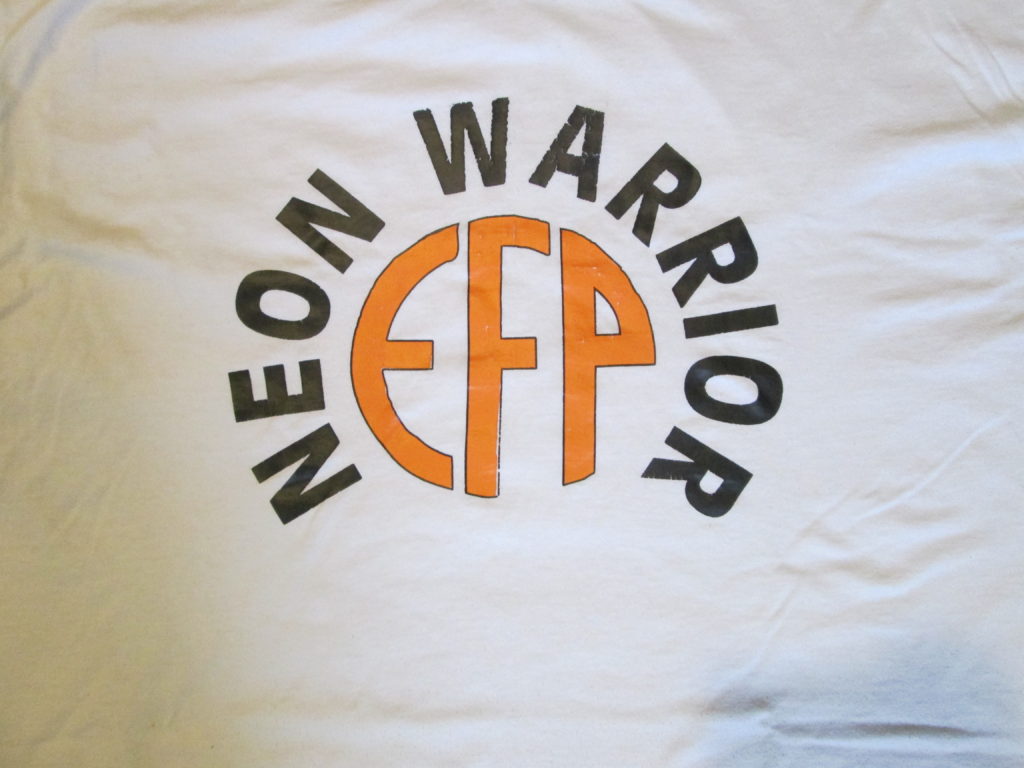 A T-shirt with the EFP logo used by the union workers at CFAC as a rallying slogan during the profit-sharing lawsuit. A neon sign with the letters EFP was erected on the North Fork Road near the entrance to Aluminum Drive. Photo by Richard Hanners

ARCO was initially seen as a white knight that saved the Columbia Falls aluminum plant when the Anaconda Company was on the skids. The two investors who took over the plant from ARCO in 1985 were viewed the same way – at least in the first few years, when profit-sharing was a good tradeoff for pay-and-benefit cuts. Then the two owners began to withhold profit-sharing from its employees, which hurt relations with tolling customers, affected employee morale and led to an historical lawsuit and legal settlement. For photos and images related to this topic, visit the photo albums on the Facebook site "From Superstar To Superfund."

According to some interpretations, the Anaconda Company was already weakened by internal rot by the time the Chilean government took over the company’s main income provider – the Chuquicamata copper mine. The company had invested heavily in aluminum, which was profitable, but Anaconda soon faced a barrage of hostile takeover attempts. The Atlantic Richfield Co. proved the successful suitor, and ARCO closed the copper smelters in Montana before the merger was completed in 1981. ARCO hung onto its Columbia Falls aluminum plant and completed the Sumitomo conversion, but workers and local residents remained nervous.

Continuing load growth and occasional drought led to concerns by power planners in the Pacific Northwest and the development of the Hydro-Thermal Program in the 1966, which would combine federal hydroelectric power with coal, gas and nuclear power to keep up with demand. The failure of plans to build several nuclear reactors and a court ruling over a proposed aluminum smelter in Oregon, however, led to a leadership vacuum and passage of the Northwest Power Act in 1980. The act allowed regional aluminum companies to sign long-term power contracts with the Bonneville Power Administration, but rates climbed from $2.90 to $26 per megawatt-hour from 1980 to 1985. The act also established costly fish mitigation programs that affected the price aluminum companies had to pay for power.

Rising power costs coincided with weak market demand in the early 1980s. On top of that, ARCO sold most of its aluminum assets to Alcan in 1983, generating fears among Flathead Valley residents that the local aluminum plant was next. A local grassroots group lobbied the Bonneville Power Administration for lower power costs in an effort to save the smelter, rallying locals and politicians to the largest gathering in Columbia Falls history. The effort also influenced ARCO management, who found a buyer for the plant among their peers.

Chapter 42 – Sold for a dollar

An ARCO manager teamed up with a former Anaconda manager to take over the Columbia Falls plant. Early retirement and pay cuts were matched with state loans and tax breaks in an attempt to find a way to keep the Columbia Falls Aluminum Co. smelter viable. Another big grassroots rally demonstrated strong community support for the plant. Two tolling customers were lined up, and market prices for aluminum ingot improved. A dollar in my pocket is a dollar in yours, the plant’s new owners promised the workers.

Aluminum prices reached their highest point in history in July 1988 only to plummet to the lowest in history by March 1993 – partially the result of Soviet aluminum flooding global markets. On top of that, drought forced power curtailments by the Bonneville Power Administration, while power rates continued to climb. Plant supporters gathered for another big rally to lobby for lower power prices. The plant’s owners announced no profit-sharing checks would be issued in December 1993, but by that time a second accountant at the plant had filed a lawsuit over missing profit-sharing money.

Clear evidence that a profit-sharing agreement existed could not be found in employee contracts – it existed in public statements, a letter written by an ARCO vice president, a loosely worded attachment to a union labor contract, and language in an amended retirement plan. By February 1992, the plant’s union leaders filed a grievance claiming profit-sharing money was missing. Nine months later, an employee-buyout offer and an insurance company’s leveraged-buyout offer were rejected by the plant’s owners. Employees who spoke about the profit-sharing matter were fired. The consolidated hourly and salaried employees’ case was ordered to federal court in October 1993.

While the plaintiff’s attorneys filed briefs and uncovered key documents, the plant’s workers turned to graffiti and a neon sign to protest the missing profit-sharing money. As the deadline approached for scheduled labor negotiations, the owners brought in a team of out-of-state security guards in what was seen as an attempt to intimidate union workers. A modest settlement offer was made and rejected, and employees learned about a shell company in the Cayman Islands that was handling payments from tolling customers. As labor negotiations turned contentious, Sen. Max Baucus and Gov. Marc Racicot came to the Flathead to coax the workers into not striking.

The federal magistrate and judge in the profit-sharing case ruled in favor of the employees time and again, as the little law firm from Kalispell representing the plaintiffs faced big name attorneys from across the U.S. What remained to be decided was the meaning of “distributable profits,” and that would be decided by a jury in a trial, the judge ruled. Then three days before Christmas 1997, the owners offered the employees $97 million to settle the case. Fairness hearings were held, and the workers voted in favor of the settlement.

The profit-sharing lawsuit drew national media attention – both for the David vs. Goliath fight for justice story and the size of the settlement. But the victory was bittersweet, as workers found themselves caricatured as hillbillies who had struck oil. In the end, they proved smarter than media savants – the workers socked the money away as house payments, retirement plans or college funds for their children. In the aftermath, lawyers continued to sue each other over unpaid fees, and the unsavory case became fodder for Montana’s gubernatorial campaign.