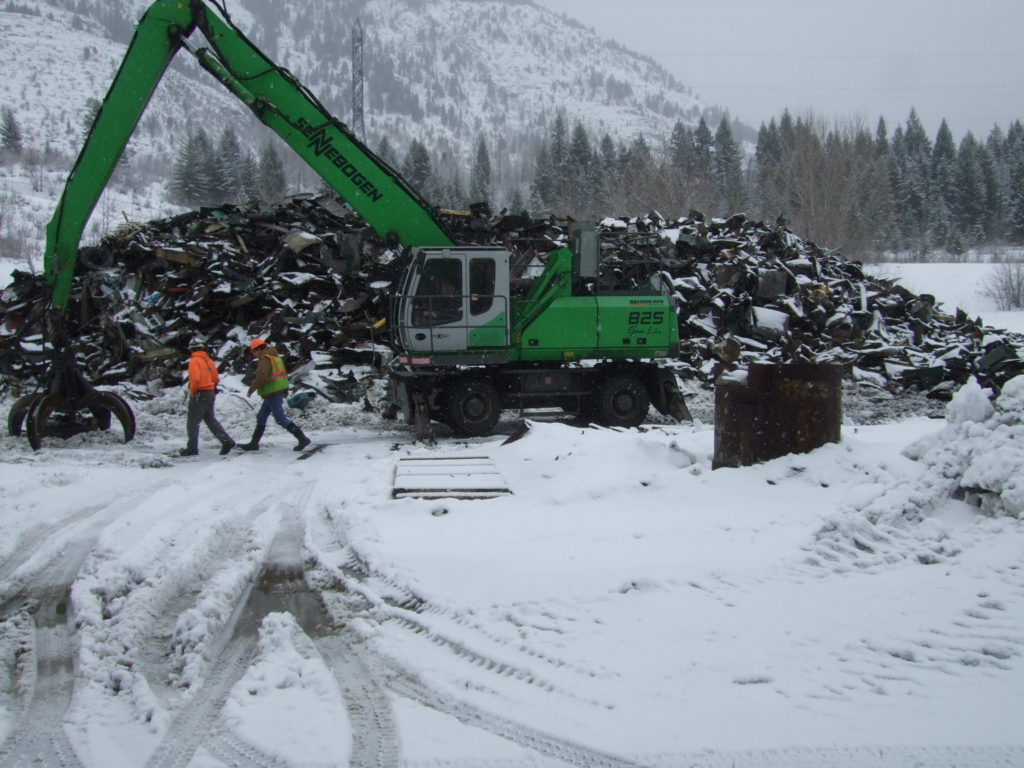 Calbag Resources personnel in front of a large scrap metal pile at the Columbia Falls Aluminum Co. plant on Jan. 14, 2016. Photo courtesy of the Montana Department of Environmental Quality

Industrial sites almost always require expensive cleanups after closure. The reckless dumping of spent potliner, wet scrubber sludge and other hazardous materials at the Columbia Falls aluminum plant during its first three decades of operation pretty much guaranteed that the property would become a Superfund cleanup project. Resistance to that designation, however, came from past company managers, local county officials and a lone congressman. For photos and images related to this topic, visit the photo albums on the Facebook site "From Superstar To Superfund."

Crews at the aluminum plant in Columbia Falls put up a valiant effort to remain competitive to the very end. The Environmental Protection Agency’s stricter rules for emissions by aluminum smelters were issued in 1997. A broken pot gas duct to one of the smelter’s dry scrubbers in 1996 led to a well-reported emergency repair project. A second ductwork project took place in 2005. Crews ran into difficulties complying with emissions levels in the plant’s final years as it contended with low grade raw materials, some taken from closed Pacific Northwest smelters.

Spent potliner contains cyanide, and waste dumps at aluminum plants across the U.S. were known to leach the hazardous material into groundwater and surface water. In the Pacific Northwest, problems with spent potliner dumps were found at Troutdale, Tacoma, The Dalles, Vancouver, Longview and Spokane. But while cleanup of on-site landfills and waste ponds could be costly and time consuming, demolition could be inexpensive and quick. The cost of taking down buildings and shipping on-site materials to appropriate disposal sites could equal the value of the metals and other materials that were recycled or reused.

The Anaconda Company built its Montana aluminum smelter within a mile of a pristine river renowned for its native fishery. Hazardous wastes were never dumped directly into the Flathead River, but landfills and wastewater ponds leaked pollutants into groundwater. Two engineered landfills were constructed onsite in 1980, and all spent potliner from the Columbia Falls smelter was shipped out of state by 1985, when ARCO sold the plant. The state had growing concerns about contaminated groundwater by 1992, and the Environmental Protection Agency reported finding cyanide seeps on the banks of the Flathead River in 1996.

The Superfund process kicked off in December 2012 after a state senator talked to the Flathead County Commissioners about having the aluminum plant declared a Superfund site. The Columbia Falls City Council asked the governor to support a Superfund designation in April 2014 after an EPA site report mentioned a cyanide hit in a residential well near the plant. Cyanide was not detected in any neighboring residential wells after that. Meanwhile, the city and the county diverged on support for a Superfund designation, and Glencore broke off cleanup negotiations with the state in December 2014. Glencore announced the plant was permanently closed in March 2015.

The Environmental Protection Agency formally proposed placing the Columbia Falls aluminum plant on the Superfund’s National Priorities List in March 2015, kicking off a round of town hall meeting, letter writing and debate. Opponents to Superfund listing, including Rep. Ryan Zinke and the Flathead County Commissioners, were concerned that it was difficult to remove a site from the list, and having a Superfund site nearby could stigmatize a local community. Meanwhile, Calbag Resources signed a demolition contract for the plant in April 2015, and a West Virginia public relations company hired by the aluminum company began to hold meetings about the site’s future with selected officials and residents in May 2015.

The Environmental Protection Agency officially placed the Columbia Falls aluminum plant on the Superfund’s National Priorities List on Sept. 9, 2016. The designation followed decades of work at the largest Superfund site in the U.S. – environmental legacies of the Anaconda Company’s mining, smelting and refining operations in Butte, Anaconda and Great Falls. The Columbia Falls designation came on the heels of timber plant closures in the Flathead Valley and plummeting tax revenue from the former smelter site. Still to be determined was the extent of the contamination at the plant site, how the site would be cleaned up, and who would pay for the cleanup.

Demolition was still underway when a Brazilian transformer manufacturer showed interest in setting up a factory at the CFAC site. Several months later, Roux Associates issued a 7,315-page draft site characterization report that confirmed many expectations about groundwater pollution at the former smelter property. Public reaction to the report was also unsurprising – frustration at the amount of time tied up in years and years of investigations before cleanup would actually begin.

Chapter 62 addendum – Reports and a lawsuit

As complex studies of the CFAC Superfund site piled up, demolition continued at the former smelter site, with buildings removed and potroom basements filled. A state health agency took a look at cancer threats in the Flathead Valley, and Glencore, through its proxy CFAC, sued Atlantic Richfield to recover cleanup costs.

A series of mergers beginning in 1998 dramatically restructured the global aluminum industry – Alcoa absorbed Alumax and Reynolds, Rio Tinto absorbed Alcan, Alusuisse and Pechiney, and Rual, Sual and Glencore merged aluminum operations. Glencore went public with an IPO in May 2011 and then merged with mining giant Xstrata in 2012. Aluminum production in the U.S. dramatically decreased, as Alcoa closed smelters and turned its focus to fabrication and engineered products. Meanwhile, aluminum production by China and the Middle East continued to grow.

Chapter 64 – The future of aluminum

Looking to the future, three old problems remained – how to increase the efficiency of the aluminum production process, how to address pollution problems, and what new products could be made from aluminum. Various attempts to replace the Bayer process for alumina refining and the Hall-Heroult process for aluminum reduction had led nowhere. The best solution to improved efficiency was recycling. Fluoride and hydrocarbon emissions could be adequately controlled with modern prebake reduction pots and good primary and secondary scrubbers, but aluminum reduction would continue to generate carbon dioxide and contribute to climate change. To offset that, lighter-weight vehicles made with aluminum could reduce energy consumption and thereby lessen carbon dioxide output. Dealing with red mud from alumina refineries was another problem left to be solved.